Note: A variant of this paper was first published in Chapman University, Argyros School of Business and Economics, The Investment Review, Volume 2, May 2015; click here to download a PDF.

A lot happens and changes in the investment world every day, and market reactions are often contrary to initial expectations; but with an understanding of certain long-term themes one can grasp the big picture of what influences the markets. In the 1980’s and 90s, the average person received much of their investment news from a daily paper and a half hour on Friday evening watching Louis Rukeyser’s Wall Street Week. Today, one is deluged with an avalanche of data, opinions and arguments from professional managers, blogs, investment sites, CNBC, Fox Business, email, retail trading programs, and social media; the doomsayers, rumor mills, and fear mongers unfortunately garner much of the attention. Below are some of the themes that my partners, Greg, Rob, Peter, and I use to protect and grow assets as well as rationally frame and interpret the broad forces moving the market now and over the next few years.

Table 1. A SAMPLE OF 10-YEAR GOVERNMENT YIELDS FROM AROUND THE WORLD 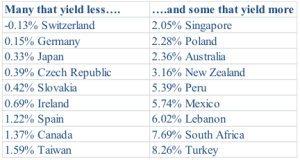 We hope that you too can use some of these themes to frame the big picture of what moves interest rates, stocks, bonds, real estate, and the value of businesses. Please let us know what questions you have.

[Disclaimer: This information is not directed to any person in any jurisdiction where (by reason of that person’s nationality, residence or otherwise) the publication or availability of the information is prohibited. Persons in respect of whom such prohibitions apply must not access this document. This material is not intended to be relied upon as a forecast, research or investment advice, and is not a recommendation, offer or solicitation to buy or sell any securities or to adopt any investment strategy and does not constitute any investment recommendation. This is meant to be a discussion piece and should not be treated as advice nor as an investment guide. The opinions expressed are as of April 10, 2015, and may change as conditions vary. Any references depend on the circumstances of the individual and may be subject to change. In preparing the information, we have not taken into account your objectives, financial situation or needs. Information contained herein is subject to change. There is no guarantee that any forecasts made will come to pass. Reliance upon information in this material is at the sole discretion of the reader. Investment involves risks. International investing involves additional risks, including risks related to foreign currency, limited liquidity, government regulation and the possibility of substantial volatility due to adverse political, economic or other developments. All examples, tables and models are used for illustrative purposes only. Please check all info