Stock Prices Have An Alibi

Stock Prices Have An Alibi 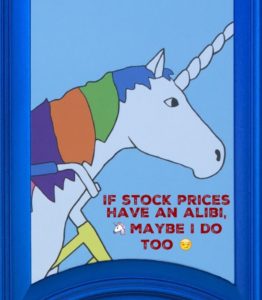 So far this year, we’ve seen stock, bond, and commodity prices move across a relatively wide range of values, European banks grapple anew with stability concerns even though capital is in abundance, central banks remain dovish while short-term LIBOR rates creep up, Brexit and US election campaigns roil passions, and green shoots of wage inflation although prices seem stable.  Charles Dickens summed up similar conflicted feelings over 150 years ago in his opening to “A Tale of Two Cities,” (i)

Different markets, parallel jitters: over the last year, as market asset prices shifted from high to low and back up again, investor anxiety has remained consistently elevated. When stock and credit markets were performing poorly during the August to February stretch, investors seemed understandably nervous; commodity prices were low, retail store and energy company defaults were up, and the pullback in oil prices was having negative effects across the industrial sector. Now that some U.S. stock indices have recently made new record highs, global assets have recovered from Brexit headlines, government bond yields are near all-time lows and credit spreads are tighter (which means that bond prices are relatively higher), and oil, gold and most commodity values are well off their bottoms – in other words, assets look good – investors still seem apprehensive of the next calamity or hiccup. The irony that both high and low asset prices cause similar fears is hard to miss; none-the-less, market concerns are not entirely misplaced.

The stability of European banks is a gnawing affair, with €360 billion (ii) in bad loans on Italian banks’ balance sheets (iii) and financial health concerns (expressed by widening credit spreads and plunging stock prices) at well-known names such as Credit Suisse, Deutsche Bank (DB), and RBS. Capital ratios at the banks may not be strong enough to withstand a true stress test of write downs and flight to quality.  In addition, low to negative interest rates are hurting banks’ net interest margins (an area that traditionally has been a source of bank profit) as well as the profitability of European insurance companies. A 117-page June International Monetary Fund (IMF) report stated that, “Among the [global systemically important banks], Deutsche Bank appears to be the most important net contributor to systemic risks in the global banking system, followed by HSBC and Credit Suisse.” (iv) Furthermore, a worrying impression comes from a July interview in the well acclaimed German magazine Der Spiegel with Deutsche Bank CEO John Cryan where he says there is no need for DB to raise capital in the public markets (v); the cynical take on this would be that DB can’t efficiently raise capital.

Partially because of these pervasive banking risks, global central bank policies will remain easy and create the potential for a melt-up in stocks. We may even be in the midst of a melt-up now. U.S. stocks look somewhat unloved and possibly under owned at these record high levels and appear cheap compared to bonds on a yield basis, which means that they could have room to go higher. Post the U.S. presidential election, fiscal policy may provide upside; tightening high yield credit spreads (which mean that investors get paid less for taking risk) appear to confirm this. The market may already be pricing good expectations for 2017 with the potential for economic and earnings upside as fiscal stimulus prods corporate and consumer revenue higher. Earnings growth is of greater concern than valuation; thus, as long as investors believe earnings will grow, high prices have an alibi.

Policy makers globally want to generate inflation to ease debt service, deleverage balance sheets, lower pension obligations, and boost investment spending.  U.S. inflation is slowly rising – through higher wages, government spending, healthcare costs, rents, and asset prices – and should initially be friendly to stocks because it boosts nominal earnings and reduces the relative attractiveness of bonds. In addition, consumer credit is expanding; thus, if the great consumer debt deleveraging of the last eight years has ended, then consumer spending has legs to run, especially if there is a whiff of inflation; i.e., a perception that it is best to buy and enjoy something now before prices rise.

Whichever way inflation shifts, U.S. election uncertainty will weigh on corporate and investor behavior, but macro-economic events, business fundamentals, and earnings will have a more profound influence.  Hillary Clinton’s top economic priorities, if she wins, are infrastructure spending ($270B over five years) and a jobs plan combined with corporate tax reform which could allow for a onetime repatriation of corporate earnings held overseas. Donald Trump’s top economic priorities, if elected, are fiscal stimulus with tax cuts and more than $500B of infrastructure spending combined with corporate tax reform. Thus, although one could wrangle over who will be more effective, either candidate should be fiscally stimulative in the first six months of their term.

Thus, it is the best of times and it is the worst of times, but as long as earnings can increase, moderately high asset prices do have an alibi.  And even with all the risks out there, several forces, including inflation, fiscal spending, and central bank policy are conspiring to help. If the green shoots of inflation do rear their head, earnings will likewise inflate and optically seem even better. Increased fiscal spending form either presidential candidate should be stimulative, at least in the short to medium term. And easy monetary policy from central banks remains accommodative to assets.  Therefore, although asset prices may continue to swing and risks abound, a continued upward leg over the next six months is quite possible.