The market perceives bargains to be had

The market perceives bargains to be had

With economies strong and interest rates still historically low, the market perceives bargains to be had; the world is on sale. Whereas around the globe – from Los Angles to Moscow and Sao Paolo to Shanghai – most people are paying more for food, clothing, utilities and housing than they did six years ago, a large pocket of the capital markets has experienced little to no inflation. In fact many companies are cheaper now on a relative basis and even on an absolute basis than they were six years ago. In addition, cash is plentiful:

There is global grassroots pressure for social and political improvement.

Figure 1.   In March, the US Treasury yield curve shifted significantly 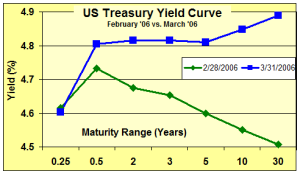 Although a 0.03% difference is relatively flat, the flip in the shape of the yield curve is significant; it alleviates the market’s trepidation of an imminent economic recession. With the yield curve’s positive slope the market can now refocus on its usual see-saw debate between hoping for positive economic growth versus fear of Fed over-tightening.