Demographics and the $10 Billion Family

Summary:
Modern global magnates (MGMs) represent a new class of globally connected entrepreneurs and industrialists on a scale and breadth previously not seen, with a large number coming not only from developed countries, but from socialist countries such as China and Russia as well as from rapidly developing countries such as India, Indonesia, Nigeria and Lebanon. These MGMs and their families – that have arisen in the last couple decades with unique opportunities, responsibilities and risks – have a multi-faceted role with investing. They invest with their enterprise in mind, with a long-term view to promote infrastructure and stability of nations, and with a desire for legacy. To aid these goals, MGMs can use the BEILD Framework to effectively address their primary concerns of business, investment, family, lifestyle, and distribution of wealth.

Preamble:
The newly arising demographic of the modern global magnate (MGM) takes us back to the days of the international late nineteenth and early twentieth century industrialists. Although the MGM demographic is small, it is growing rapidly and will continue to have an outsized influence on the dynamics and structures of developing markets. That is what makes MGMs so fascinating. We believe that raising the body of knowledge on these new industrialists is of interest since how they allocate their wealth affects global trends and the development of nations, and therefore deserves investigation and analysis.

Over the last two or three decades, with the advent of capitalism across the socialist worlds of China and Russia (including stock exchanges and private property rights) along with the true economic rise of emerging and frontier markets (like Brazil, India, Indonesia, and Lebanon) there has been a relative democratization (even if imperfect) of global capital. Countries, power dynamics and populations have changed considerably and have had a direct impact on the approach to investing. A new entrepreneurial and industrial class – the +$10 billion modern global magnate (MGM) – has arisen as industry and nation builders with multinational reach. A rapidly growing number are from countries where significant investment was made in creating and building infrastructure (e.g., steel, mining, telecom and finance) to enhance the well-being of that nation; these investments in turn have aided MGMs’ expansion and ties to the global marketplace.

The MGM is a much more globally interconnected reincarnation of the industrialists and financiers of the 19th and early 20th centuries: Rockefeller, Carnegie, and Morgan who built up railroads, steel mills and factories in the U.S.; Yatarō who founded the Mitsubishi zaibatsu in Japan; Schneider, Michelin and Dassault of France; Birla in India; or Zhang Jian with agricultural mills and shipping lines in China. The MGMs enjoy:

However, merely being worth more than $10 billion is not enough to be an MGM. Most MGMs are self-made and deeply involved in their businesses. They have created or greatly expanded their wealth rather than just inheriting or shepherding it. They are individuals that have,

Most of the wealth [see Table 1] was generated in everyday domains (e.g., retail, finance, and beverages), basic industries (e.g., telecom, steel, and mining) and technology (e.g., software, search, and data). From a historical perspective, the MGM might want their progeny to emulate the Medicis and Rothschilds, whose families had cross-continental influences which aided industries and governments through boom times and wars across multiple generations. However, most MGMs are very early in the establishment of their family legacy[i] and multigenerational success is difficult to establish. There are approximately 85 MGMs, but their numbers should at least double within five years

Billionaires and MGMs are a couple of the fastest growing demographic groups in the world. In 1987, there were 140 billionaires[ii]. In 2013, 26 years later, there are 1426[iii] people on the Forbes +$1 billion list. Of those, 110 individuals have a net worth over $10 billion – that is without rounding up any of the superbly successful people with $8 or $9 billion – and about 85 of them would qualify as MGMs.[iv] Notably, there are 348 people listed with between $3 billion and $10 billion – not counting any families or people that possibly slipped through the cracks of notoriety and failed to make the list – most of which are self-made and probably five years or less away from breaking into the +$10 billion club. A bold assumption, yes; but since many are from high growth industries or better yet, high growth industries within high growth countries [see Table 2], demographics are in their favor. Thus, the +$10 billion list of MGMs should double or triple within the next five years. Of note, an increasing number of these multi-billion dollar families will be from outside the U.S. and Western Europe.

Table 2: A selection of MGMs and aspirational MGMs from developing markets 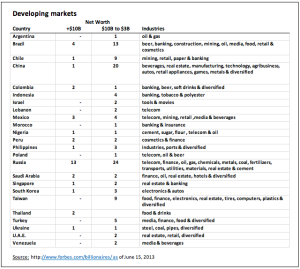 The advent of scores (and within a generation) hundreds of +$10 billion MGMs and families portends an important change to the economic and investment landscape. They have the potential to look and act like alternative funds with a long-term focus, seeking places to grow and affect social change and influence social and impact investing.

MGMs have a multifaceted role with investing

MGM needs are on a different scale than the common high-end target of institutional wealth management known as ultra-high net worth (UHNW) whose investable assets begin at $30 to $50 million or high net worth (HNW) whose investable assets are $1 million or more. MGMs’ investment choices are truly international, go beyond wealth creation, tend to be large in order to be meaningful, and focus on the following three agendas:

For the MGM family to effectively grow, analyze choices and address its concerns and goals, the following BEILD MGM framework may be helpful. The BEILD Framework can be used to break out an MGMs three level multifaceted role with investing across five primary concerns/focal points. The MGM’s business, long-term view and legacy are dependent on 1) Business management of the enterprise, 2) Education of family, 3) Investment of assets, 4) Lifestyle pursued, and 5) Distribution of wealth. In conjunction with this, a continuous evaluation of these five focal points is necessary to keep them aligned because they are not mutually independent.

Table 3: The BEILD Framework for analyzing the primary concerns/focal points of the MGM)

Each of the five primary focal points has a number of variously interlinked subtopics to address. These subtopics should be fully recognized because they will influence actions across the other primary BEILD concerns. For example, geography of the business may have an influence on where education takes place, what countries are considered for investment, and how lifestyle and distribution are spent. Similarly, lifestyle may influence distribution of wealth and family dynamics.

Modern global magnates (MGMs) are self-made +$10 billion entrepreneurs with international reach and global roots that remain actively involved in their business management. They are one of the fastest growing demographic groups in the world, with an increasing number coming from developing markets. These MGMs have a multifaceted role with investing that focuses on:

Although each MGM is different in their issues, expertise, concentration and countries, the BEILD Framework [Table 3] gives us a tool for analyzing how an MGM can choose to invest while effectively focusing on and continuously evaluating their five primary and interconnected concerns of business, family education, investment management, lifestyle, and distribution. Implementation of such a framework warrants a custom, effective, smart, keenly understanding and engaged analysis. Successful MGMs will be able to efficiently employ such a model to address their concerns and focus on their goals.

Since the MGM is a new demographic, areas for further study include:

[Disclaimer: The information in this page is not directed to any person in any jurisdiction where (by reason of that person’s nationality, residence or otherwise) the publication or availability of the information is prohibited. Persons in respect of whom such prohibitions apply must not access this page. This is meant to be a discussion piece and should not be treated as advice nor as an investment guide. Any references depend on the circumstances of the individual and may be subject to change. Information provided on and available from this page does not constitute any investment recommendation. In preparing the information, we have not taken into account your objectives, financial situation or needs. Information contained herein is subject to change. All examples, tables and models are used for illustrative purposes only. Please check all information with a finance or investment specialist.]

[i] A notable exception is the Solari/Falabella family of Chile with their close-knit, cooperative, and multi-generational retail management across Latin America.